skip to main | skip to sidebar

Hey all, I'm back. My life has gone through so many changes over the last several years. I went from not working outside the home to working part-time to working 60+ hours a week. Im finally back to a somewhat "normal" lifestyle which means time for doing the things I most love, knitting, spinning, blogging, gardening and family!!! I'll be filling in the holes from the past several years a bit at a time. Y'all remember this post from several years ago? She had a great fall Well.....I now work for the devil!!!! I'll be posting some pics of my current OTN and some finished soon. I'm just happy to be alive and blogging once again.
Posted by Peggy at 7:02 AM 2 comments:

What's up?  It has been a busy time in my household.  Unfortunately, not much knitting, spinning or general creativeness happening here.  As many of you know my handicapped sister came to live with us about a year and a half ago.  I think it is always a challenge when anyone comes to live in your home long term but, if there are other factors involved it is much more difficult.  I won't go into details, it is what it is.


On a lighter note, I'm hoping to get back to "normal" or a new normal soon.  It has been a crazy last four years.  I gotta get back to my knitting and spinning, for years that has brought me great joy and I have more yarn and fiber than I know what to do with.  I think I may just jump in and start My Wicked Emerald City Coat. 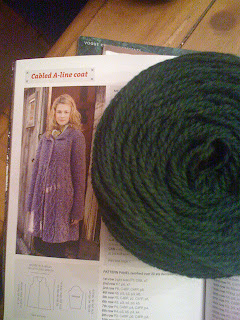 Several months ago I wrote about losing my knitting mojo. I believe I'm on the track of locating it. Sometime last year I decided to become a selfish knitter. You know how it is. You knit and knit and knit for everyone else in the universe yet when you open your drawers or closet there is nothing to be found of your own handmade goodness. You've given it all away. Now, don't get me wrong, we do need to reward ourselves for all our hard work and creativity, but for me, this may not be for you, for me I'm beginning to believe THAT is when my mojo began seeping ever so slowly away. I began losing my knitting mojo when i decided to become a selfish knitter. I've found my greatest joy in knitting for others or giving the things I knitted for myself to others. That being said, I will no longer be a selfish knitter. I think I can find a happy medium somewhere.

Presently I'm working on a couple surprises for Valentine's Day. I can't tell you what it is because the recipients read this blog. Then it wouldn't be a surprise. If you really need to know you can either message me. It's a fun, quick, easy, beautiful and useful knit. That's all I'm gonna say.

On the search for the mojo I've come up with an idea. Since I live in downtown Bowling Green the main roads I travel are also traversed by those on foot or by bicycle. Many times the pedestrians I've seen this winter or traveling without proper head/neck wear. I'm thinking about knitting up a bunch of simple hats and scarfs and when I see this cold souls giving them the goodies. Just think how much mojo could be stirred up!!!!! One problem that needs to be overcome is how to give the items to them. I don't want to hold up traffic or have to park and run after these people. My daughter suggested I wrap the items around an apple and throw them at 'em. This would add the necessary weight to propel the item. Not only would they get a warm hat or scarf, they'd get a little snack as well. Gotta check with my auto insurance though........there could be some injuries incurred if they aren't very good catchers or to be more truthful I really suck at throwing. Sometimes this searching for the mojo can be quite difficult.
Posted by Peggy at 4:33 PM 2 comments:

Today is the first day of December........I'm not sure......but I think it is time to start that Christmas knitting!!!!!  My problem is this.  I can't just knit gifts for knitting gifts sake.  I have to have inspiration.  I have to have a dream.  Maybe I'm a dreamer, I don't like to go looking for patterns I like for patterns to find me.  Understand?????  You know, you see something you know you just have to make.  That special gift for that special someone.  Such as.....Lyra's Hat from The Golden Compass or all those ear flap hats you see in the mall stores.  I've decided I wanna make those.  That would knock out several gifts. As is typical, I have lots of yarn but not that special yarn that speaks to me for these hats.  Guess that means I'll have to "make" myself run off to my LYS (Enchanted Yarn & Fiber) to find that speaking yarn.  Or I could dive into my stash......not near as much fun!!

I need inspiration!!!!!  Or possibly I'm a sadist that only produces under extreme time pressure??

What motivates your holiday knitting?
Posted by Peggy at 9:53 AM 1 comment:

Let it be known throughout the land!!!!!

Let it be known throughout the land, Friday has been officially designated as Spinning Day.  For far too long I've neglected my beloved wheel.  She has sat there in the corner of my bedroom very patiently waiting for my life to settle down long enough to give her the deserved attention.  From here on out she and I will spend Friday's together.

So, now that that has been established the question came to "What to spin?"  People, it is redic!!!  I have 4-5 of Abby's Luxury Batts, 3-4 of Abby's Silk, Cotton, boxes of Romney, Jacob and Alpaca, Superwash roving, Llama, Angora, Silk roving, Cormo, Gotland, Raw fleece by the bags full....... 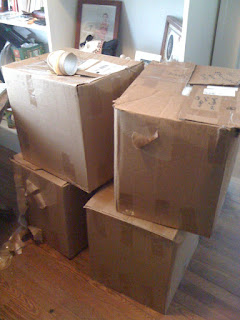 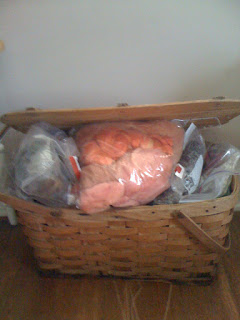 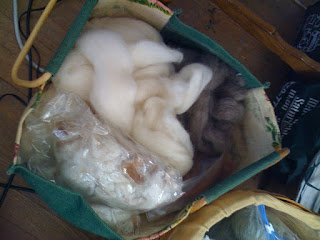 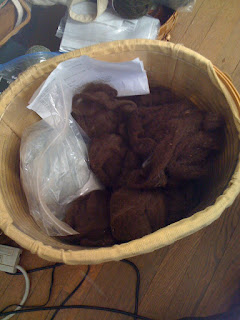 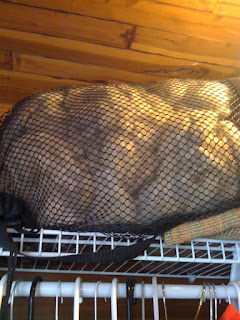 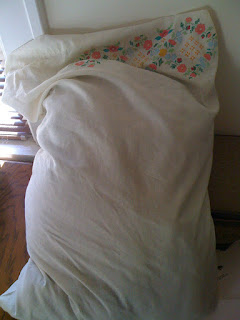 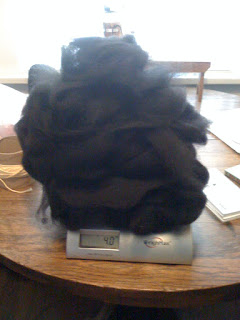 I've settled on starting the first weekly Spinning Friday with the spinning of this gorgeous black Alpaca roving loving given by Amarosa the Alpaca.  Several years ago my husband's cousin graciously sent me fiber from 4 or 5 of the Alpaca from their farm.  I sent it off to a fiber mill and had it turned into roving.  Really gorgeous, soft fiber.

I have 3 lbs 12 oz of this wonderful stuff.  I decided to measure it out in 4 oz section so I can hopefully get the same amount of singles on each bobbin before plying.

Why don't you join me on Spinning Fridays?  It is be a "virtual spinning guild."
Posted by Peggy at 9:43 AM 6 comments:

What's on your Holiday needles?

What's on your Holiday needles? What projects/patterns do you turn to when you need a quick gift? I have several standards I fall back on and this year thanks to Enchanted's Christmas Club I have a couple more. Typically I fall back to knitting dishcloths. They are a quick knit and oh so useful. Plus, there are plenty of free on-line patterns and so many gorgeous cotton yarns. Or I knit up a bunch of fingerless mitts. I love the Fetching pattern. It's quick when using a worsted or DK weight and inexpensive. 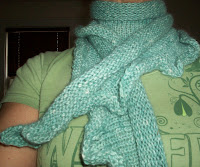 This year I'm adding the Biscuit Blanket from February's club project and the Just Enough Ruffles scarf from January's club project. Both are fast knits and again an inexpensive gift.  What you got going?
Posted by Peggy at 6:48 AM 2 comments:

"CHIPPIE THE PARAKEET NEVER saw it coming. One second he was peacefully perched in his cage. The next he was sucked in, washed up, and blown over.

The problems began when Chippie's owner decided to clean Chippie's cage with a vacuum cleaner. She removed the attachment from the end of the hose and stuck it in the cage. The phone rang, and she turned to pick it up. She'd barely said 'hello' when 'sssopp!' Chippie got sucked in.

"The bird owner gasped, put down the phone, turned off the vacuum, and opened the bag. There was Chippie-- still alive, but stunned. Since the bird was covered with dust and soot, she grabbed him and raced to the bathroom, turned on the faucet, and held Chippie under the running water. Then, realizing that Chippie was soaked and shivering, she did what any compassionate bird owner would do . . she reached for the hair dryer and blasted the pet with hot air.

"A few days after the trauma, the reporter who'd initially written about the event contacted Chippie's owner to see how the bird was recovering. 'Well,' she replied, 'Chippie doesn't sing much anymorc he just sits and stares.' An excerpt from Max Lucado "In the eye of the storm."

These last two years have probably been the hardest of my life. Accusations, slander & lies, rejections, loss of income, change of lifestyle, added responsibility of the full-time care of my sister, having to put my aunt that raised me in a nursing home and dealing with her degenerated mental state, my own physical issues......many, many changes.

Remember this, "I'm A Hummer", entry I posted in March '08. Definitely a simplier time!!!! Like Chippie I've found myself not humming much, if at all, over the last couple years. I didn't really think about it until a couple months ago when David brought it to my attention that he had'nt heard me humming for quite some time.

I'm happy to say though in the last month I've caught myself humming every once in a while. It is a good sign that my heart and mind are loosening up. I don't want to give the impression that there hasn't been great joy during the last two years. It definitely hasn't all been bad, much of the changes have brought great freedom. However, I have found myself thinking "I want my life back." The life where I wasn't so mentally strained with the daily decisions and such that any creativity was squelched. The life where I had the time, strength, joy and creativity to blog, knit, spin, cook, garden, sew..........

Even though we may feel like Chippie. We need to give ourselves time. The song may not be the same as it was before but still a song it will be. I'm a Hummer!!!!!!!
Posted by Peggy at 8:28 AM 4 comments:

Peggy
I live in the great state of Kentucky with my husband. Our three children live in the vicinity.

Look for Pegstur on Ravelry!!!!

Subscribe to Knitting and Spinning With Ewe by Email